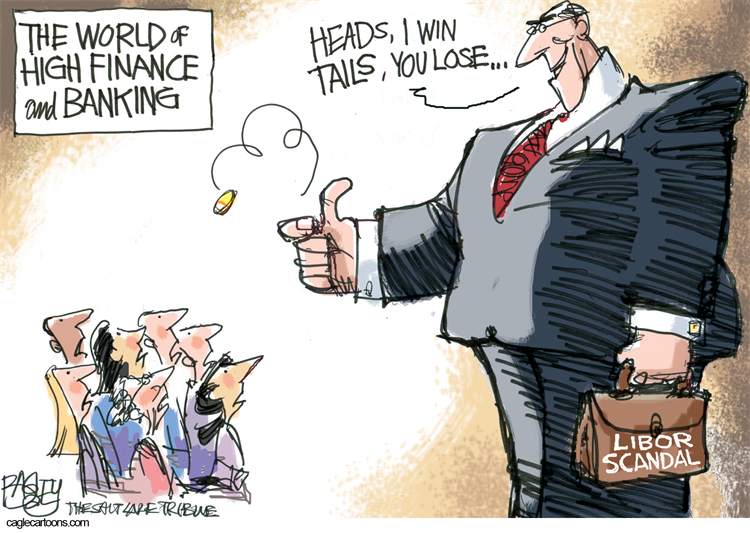 Most contracts that reference LIBOR include a ‘fallback’ clause, which defines the rate that the contract would fall back to if LIBOR were no longer available – a condition that, it had always been assumed, would be a temporary one if it were to occur at all.  Historically there was a wide spectrum of rates used to temporarily replace LIBOR in financial contracts, that included: ‘the last LIBOR rate,’ ‘the closest equivalent rate’, ‘the prime rate’, ‘calling a bank and requesting their rate bilaterally,’ and no fallback at all.  In our brave new world of LIBOR’s eventual demise, the ARRC was formed to, in their own words, ‘support and prepare market participants for the transition from U.S. dollar (USD) LIBOR to the Secured Overnight Financing Rate (SOFR).’

Since its inception, the ARRC’s recommendations for fallback language have been driven by ISDA for derivatives contracts, with a clear definition that in the case of LIBOR not being available, then transactions would fall back to using overnight SOFR.  Daily observations would be averaged over the interest accrual period, with a spread adjustment added to account for the difference between LIBOR and SOFR.

For cash products – Syndicated Loans, Bilateral Business Loans, FRN’s, Securitizations, Mortgages, etc. – the ARRC established (for each) a working group with broad industry representation to collaborate, and ultimately recommend fallback provisions that best fit their particular market.  The working groups were tasked with being consistent with ISDA and each other while minimizing value transfer (i.e., winners and losers).

We review here the recommendations of the ARRC Securitizations Working Group (co-chaired by the Structured Finance Association and the CRE Finance Council).  As with all asset classes, the main variables of fallback provisions are the triggers that cause a fall back from LIBOR and the rate/adjustments determination process.

The triggers – these are the conditions and/or events will signal that the contract in question must change its rate determination – for securitizations are:

A) cessation of LIBOR,
B) LIBOR is no longer representative of the market, and
C) Asset Replacement Percentage Exceeded.

Cessation is defined as a public announcement by either the administrator of LIBOR (ICE), the administrator’s regulator (the FCA), or the Fed that LIBOR has ceased to be published; this matches ISDA’s current triggers.

Non-representativeness is defined as a public statement by the FCA that LIBOR, while still being published, is no longer representative (of underlying markets or economic reality); ISDA is in the final stages of defining its own stance on this ‘pre-cessation’ trigger and is expected to make announcements before the end of 2019 that their documentation will, in fact, include it.

The Asset Replacement Percentage is considered to be Exceeded if a preset percentage (transaction specific) of the underlying assets has converted to the replacement rate or has been replaced by assets bearing interest based on the replacement rate.  This trigger is unique to securitizations and is not applicable to other asset classes.  It is meant to reduce the magnitude of potential basis risk between the assets and securities, for transactions in which both the assets and securities are (originally) pegged to LIBOR.

If one of the above-described triggers occurs, a process will be set in motion whereby a new rate will be put in place.  There are two components of the all-in replacement rate – a successor rate itself (SOFR for U.S. dollars) and a ‘spread adjustment’ to calculate the difference between traditional LIBOR term rates and SOFR for the matching tenor.  For securitizations, the ARRC has recommended as a first step that if LIBOR with tenors longer and shorter than this transaction-specific tenor is still available, the replacement benchmark will actually be interpolated LIBOR, interpolated between the available longer and shorter tenors.  If this process cannot be utilized, then the following waterfalls would be used for the rate and spread adjustment, respectively:

The rate waterfall is:

Note: Transaction parties have the option to include a clause allowing for quarterly retesting of the waterfall, so that even if Term SOFR is not initially available, it may ultimately be designated as the replacement rate, once available.

The spread adjustment waterfall is:

Unlike loan agreements, securitizations by their nature cannot accommodate an “Amendment Approach”.  Specifically, per the Trust Agreement, any amendment proposed by the transaction parties may only be implemented with 100% approval of investors, a requirement that is impractical if not impossible to fulfill.  This is likely why steps 3 and 4 were included in the rate waterfall.

Term vs Overnight SOFR – Unlike some other asset classes (notably, Syndicated Loans), the securitization market seems to still anticipate the eventual development, approval, and adoption of Term SOFR.  At a recent industry gathering, sponsored by the Structured Finance Association (SFA), the importance of Term SOFR was emphasized by issuers and investors.  This is also evidenced by the inclusion of the optional quarterly retesting of the waterfall described above.  It may be more difficult for some securitization transaction parties to operationalize or otherwise accept the set-in-arrears provision.  It is to be hoped that this does not add to an overhang of deals that are not ‘prepared for’ a sudden, unanticipated cessation of LIBOR.

Basis Risk – One of the concerns (generally) regarding fallback provisions is that basis risk that could arise between cash products and derivative hedges, due to differences in triggers and/or waterfalls.  This risk is exacerbated in securitizations by a third leg – the assets underlying the securities.  For example, if the Asset Replacement Percentage (say, 50%) trigger occurs, 100% of the securities will convert to SOFR (plus adjustment), while only half of the underlying assets will have converted to SOFR.  If either investors or the issuer have hedged their position, that hedge could still be pegged to LIBOR, as this ARP trigger is not a standard derivative trigger.  This underlines the importance of structuring hedges to precisely match (in all respects) the cash instrument – in this case with the swap transaction being modified to include the ARP trigger.  This, of course, will be a departure from the pending ISDA protocol.

Legacy Transactions – While concern about the treatment of legacy transactions is common to all LIBOR contracts, it can be more worrisome in securitizations than in some other cash products.  Here’s why:

Litigation Risk – The risk of litigation arises from an investor’s position experiencing a loss in value, due to a LIBOR fallback event (coupled with inadequate fallback provision language) that changes the economics of the transaction.  The investor might then seek legal redress, which could take various forms and be based on a variety of legal constructs.   Another possibility is that although LIBOR is still being published, a counterparty might sue for damages, claiming that LIBOR is no longer representative; the counterparty might even invoke the ARP trigger (via lawsuit) described above, invoking a fairness argument, and pointing to the fallback provisions of new securitizations.  Finally, for securitizations involving consumer loans, there is the risk of class-action suits brought by consumer protection advocates, which could have a negative impact on the asset pool itself, and even the integrity of the securitization itself.

Effect on Equity and Subordinate Tranches

Securitizations are credit-tranched, meaning that cash flows from the asset pool are paid according to a waterfall, in order, from the most senior (usually AAA/Aaa) to the most junior (Equity Tranche).  Thus, the junior tranches provide credit enhancement to those that are more senior.  If there are impingements to asset cash flows arising from the handling of LIBOR’s cessation, they will impact the equity and subordinate tranches first.  Such an occurrence, or the market’s perception of its future possibility, could have detrimental consequences to prospective transactions in this space, causing higher funding costs for the issuer, even affecting the feasibility of issuance.  This risk underlines the importance of a smooth, efficient transition that addresses the concerns of all major market participants.  In practice, there have been at least two CLO transactions in which junior investors objected to the inclusion of ARRC-recommended fallback provisions.  Although beyond the scope of this article, it will be instructive to understand those objections, and how they are/were resolved.

The factors discussed above, how they interact, and their collective effect on LIBOR Transition generally and the economics of Fallback Provisions specifically present challenges for the objectives of minimal value transfer, consistency across asset classes and avoidance of market disruption.  It is paramount to properly plan and structure new transactions, informed by a robust analysis of these considerations, and by collaboration and effective communication among all transaction parties – issuers, sponsors, investors, rating agencies, regulators.  Further, each of the sub-classes of securitizations (ABS, RMBS, CLO’s and CMBS) has its own considerations around LIBOR Transition and Fallback Provisions in new and legacy deals.  While outside the scope of this article, we look forward to discussing them in the future.  Finally, in writing this article we reviewed, considered and leaned on the work of the Structured Finance Association and the ARRC’s Securitization Working Group, as well as our own experience in these markets.

Finally, it should be noted that although the rate waterfall points first towards Term SOFR, the FRB has been consistent and clear that such a forward-looking SOFR rate, along with the mechanism to calculate it and an endorsement to use it as a benchmark, is unlikely to be delivered before the second half of 2021.  By then, many derivatives dealers and users will have started to transition legacy portfolios, and certain firms will have started issuing SOFR-based loans.